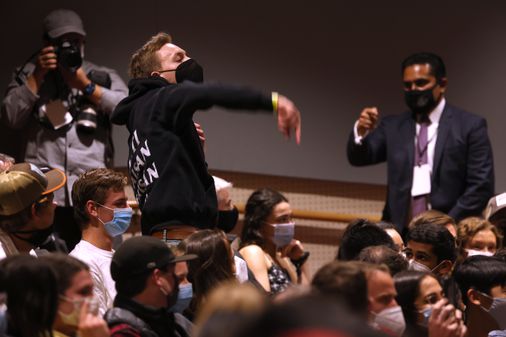 In response to the stifling atmosphere of many American universities, a group of scholars, journalists, artists, philanthropists and public intellectuals recently united to found a new institution: the University of Austin. This higher education experience aims to foster an environment of open debate and the fearless search for truth.

Get Weekend Reads from Ideas

A weekly bulletin from the Boston Globe Ideas section, forged at the intersection of “what if” and “why not”.

I was selected to be an instructor for this program, due to my own unusual background and experience in higher education.

I was born into poverty and raised in foster homes in Los Angeles and throughout California. At 17, I fled, enlisting in the army right out of high school. In 2015, I entered Yale on the GI Bill and discovered that the university was quite different from what I expected. Hundreds of campus protesters demanded that two professors, Erika and Nicholas Christakis, be fired for defending free speech. Maybe, I thought, it was just a one-off incident. But then I came to Cambridge University as a PhD student, and in 2019 watched as protesters successfully uninvited Jordan Peterson as a visiting scholar from the university.

I described these experiences to my class at UATX, and several students slowly nodded in recognition of the dominant campus culture. I then asked the 10 students: How many of you have withheld a social or political opinion on your campus for fear of ostracism or reprisal? Nine raised their hands.

It was obvious that, like me, these young students wanted an academic environment that values ​​freedom of expression and open research. The class I taught focused on social class and the role of money, education, and culture in the American status system. I tried to foster the kind of environment that I would have liked to have as an undergraduate student.

In a discussion of social class, I asked my students a simple question that I would never have uttered at Yale or Cambridge: “Do some poor people deserve to be poor?” This sparked an immediate reaction from the students, who replied that no one “deserved” the deprivation.

I then rephrased by asking, “Are some people more responsible for their own economic woes than others? Even that I wouldn’t ask students at a seminar at an elite college.

I asked this question about accountability to my students—whose home institutions included Stanford, the University of Chicago, and Columbia, among others—to help them understand their role as future leaders. Research indicates that graduates of these colleges are most responsible for shaping politics, culture, and customs. As Pano Kanelos, the president of UATX, wrote, “Universities are places where society thinks, where the habits and mores of our citizens are shaped.”

I explained to my class that if those who sit at or near the top of society ignore the importance of individual action, it undermines the dignity of people in disadvantaged and dysfunctional environments who are trying to improve their life.

A student replied, “What about people who are desperately trying to improve their lives but get arrested for it, like drug dealers?

An excellent question. I explained that the majority of poor people do not commit crimes and are never arrested. I was discouraged to see that the students were surprised by this fact. The students and I talked about how the people who influence culture and shape policy often come from elite educational backgrounds and rarely have contact with people who don’t attend selective colleges like them.

We discussed how often the only poor people educated people are exposed to are those who break the law, whether in the media or in pop culture. TV shows often expose affluent viewers to low-income people who turn to crime, because that makes the story more interesting than characters who have stable jobs to take care of loved ones, which is the way on which most of the poor and working class live. One student observed that those who write and portray characters who break the law tend to come from relatively affluent backgrounds.

My purpose in asking this provocative question was not to pressure students into agreeing with me. It was about getting them to think critically about a point of view that they wouldn’t usually come across. In the end, they might come to a different conclusion than mine – and that would be perfectly fine.

I had never seen a class so intellectually engaged in conversation before. At the end of the program, one student said, “Our discussions didn’t get heated, in an emotional sense. They were very critical, in the best possible way. We were genuinely committed to each other’s ideas, even when we disagreed. »

For a fledgling university, testimonials don’t get any better than that. Eager to obtain intellectual nourishment, those involved in UATX – especially its students – have already begun to cultivate the truth-seeking atmosphere that older institutions promised. After years of self-censorship at Yale and Cambridge, I have found hope for the future of higher education.