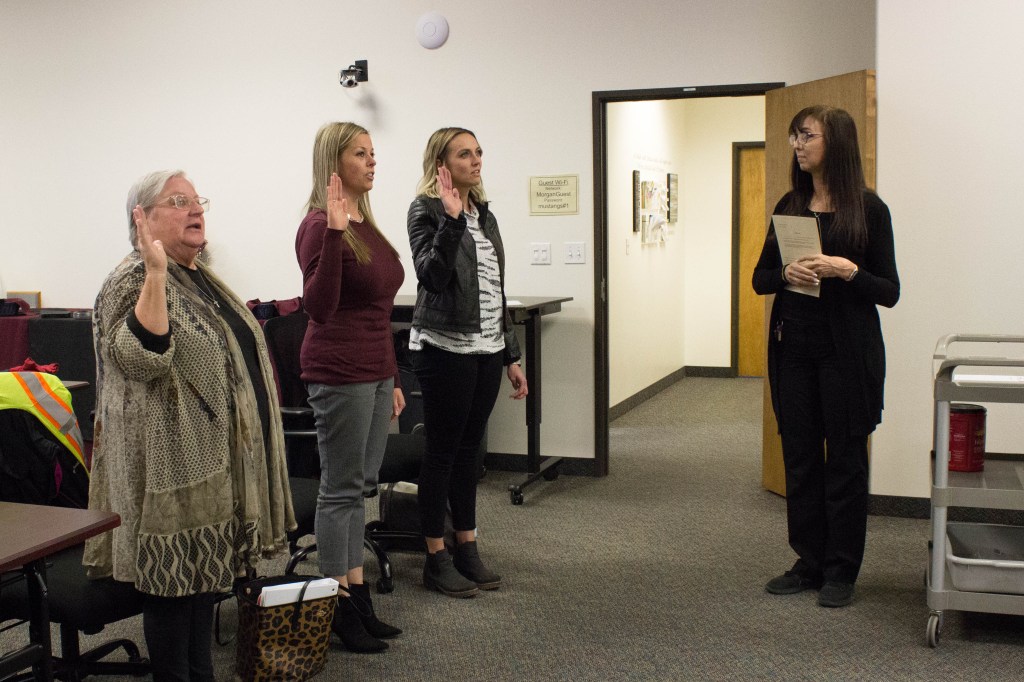 The Morgan County School District Re-3 Education Board held a meeting on Monday, December 6 with the primary purpose of reorganizing the board by recognizing outgoing members and inducting newly elected members.

“It’s very rare for someone in their first four years to become president for the last two,” said Re-3 Superintendent Dr. Randy Miller.

Once the outgoing members were seated in the audience, Council Clerk Bev Morford led the three new members – Kati Jess, Chris Brown and Amy Grantham – to recite the oath of office.

All board members were then ordered to recite the Affidavit of Confidentiality, which sets out expectations for their time on board.

A brief intermission was taken of the meeting to celebrate the outgoing and incoming Council members with a cake.

The principal of Baker Elementary School, Daniel Cooper, has been invited to speak to the board about the exciting things going on at his school.

“I could probably talk about everything that’s going on at Baker for the next four or five hours. I could go class by class… but I cut it down, ”Cooper said with palpable excitement.

Cooper first discussed the school’s recent addition of a book vending machine, one of only 10 in the state, where students can earn gold tokens specially designed for the machine. With a token, each student can choose a book of their choice from the machine to keep it afterwards.

Baker was able to buy the machine with the money left over from a welfare grant about two and a half years after the idea was first mentioned by Baker’s teacher Marcie Shaver, whom Cooper acknowledged. for his efforts in the defense of the vending machine.

“I’m proud of a lot of things at Baker, but one of the things I’m most proud of is our THRIVE program… what we’re doing for these kids and just the awesome growth and success they’re seeing,” Cooper said.

Formerly known as the Emotional Disability (ED) program, Lisa Megel, director of special education for Morgan County School District Re-3, encouraged a name change in hopes of connecting the program to a more positive association than the often stigmatized word “handicap”. “With the help of Kirk Carpenter, the acronym THRIVE was chosen, meaning Together Helping Reach Individual Victories Everyday.

Sometimes these daily wins are seemingly small, but they add up to create bigger wins in the future. Zahn’s goal, along with his three teaching assistants and Megel, is to validate students’ feelings while teaching them how to deal with those feelings appropriately and safely.

“The students have an emotional handicap and their success in general education is just not there. They are either dangerous or their behavior replaces their learning. We give them the strategies to react in a socially appropriate way, ”Zahn said. “Students who come to THRIVE do not have an ‘educational life sentence’ in the THRIVE room. When the students show that they are ready… that they are able to fend for themselves, we give them the opportunity to return to general education. As they get back to general education, it’s very gradual and with a lot of support. “

Zahn chose not to show photos of his class, but instead invite the Council to stop by and meet his students on their own.

Fort Morgan High School Representative Alex Rivas began the reports by recalling that winter break is fast approaching. He mentioned the success of the recent FMHS Christmas Parade, which featured many school clubs, and upcoming FMHS sporting events. He specifically highlighted the soccer team for winning the 3A State Championship on Saturday, December 4.

Nancy Hopper shared the Centennial BOCES (Boards of Cooperative Educational Services) report with the board, which highlighted some of the October highlights, such as a virtual book club and a trip to visit Northeastern Junior College.

Superintendent Dr. Randy Miller recognized Hopper and Rivas for their recent accomplishments. Hopper was elected to the Colorado Association of School Boards (CASB) Board of Directors for Region 1, and Rivas was named one of the FMHS Student of the Month.

He continued his reporting by announcing that the Colorado Department of Public Health and Environment (CDPHE) is returning to Fort Morgan with free and optional mobile vaccination clinics. In total, more than 400 COVID-19 and influenza vaccines were distributed at clinics in the previous month.

Miller also informed that Cator, Ruma & Associates Co. has completed their MEP (Mechanical, Electrical and Plumbing) system evaluations and are in the process of creating the offer, which they plan to complete by January.

CFO Toni Miller reviewed the October financial statements with the board, saying they are, as expected, under budget due to the number of staff employed. She pointed out that the Capital Reserve Fund had been used to purchase two new buses and complete the planned renovations to the bathrooms at the FMHS, as well as the fact that the bond payments were made on time, as well as the payments. interest and principal. Miller also discussed the FMHS Renovation Grant with the Board of Directors.

Director of Human Resources, Dr Brian Childress, discussed the board’s success in receiving Rural Alternative Licensing Allowances (RALS) from the Colorado Center for Rural Education, which provides up to $ 6,000 to be used for program costs.

He provided an update on the Salud student health clinic which is being added to the FMHS. Despite some zoning issues with the City of Fort Morgan, the clinic is still on track to open in January.

Childress also met with an insurance committee last week because he is reviewing various insurance providers for the district’s open enrollment in May.

The resolution of the Mill Levy Bond, which will result in improvements to Legion Field, has been discussed and pending approval. Superintendent Miller noted that the document should be amended to reflect current board members.

The Board of Directors approved the addition of STEM (Science, Technology, Engineering and Mathematics) courses to the FMHS 2021-2022 Enrollment Guide to coincide with the new FMHS STEM lab. The one-semester Introduction to STEM course will be open to students in Grades 9-12 and provide elective credit. The addition of the one-year CTE (Vocational and Technical Education) immersion program at Morgan Community College will allow students in Grades 11 to 12 to earn seven credits each semester and provide the opportunity for students to earn their degree from both FMHS and MCC.

The Mill Levy resolution was approved with the above amendment.

The Board approved the Early Literacy Assessment Tool (ELAT) guarantees. This approval will result in both a screening assessment and a diagnostic assessment of all Kindergarten to Grade 3 students, as required by the Reading Act to Ensure Academic Development (READ) of the Department of Education of Canada. Colorado (CDE), as well as Licenses for Academic Reading.

Morgan County School District Re-3 and Colorado Department of Public Health and Environment (CDPHE) are teaming up again to bring free and elective mobile immunization clinics to several district schools to benefit students, staff and families . On Friday, December 10, the clinic will be held at Green Acres Elementary School from 7:30 a.m. to 11:30 a.m. and at Columbine Elementary from 12:15 p.m. to 4 p.m.

The vaccines available include the three types of COVID-19 vaccines: Johnson & Johnson’s Janssen, Moderna and Pfizer. Not only can people get their first or second dose, but they can also receive COVID-19 booster shots. The Pfizer pediatric vaccine for children aged 5 to 11 will be available. Flu shots will also be available free of charge. The required immunization forms are available on the district website.

The final board meeting of 2021 will be a special meeting to be held at 7 a.m. on Wednesday, December 15.

Baker Elementary School has invited the board to attend its Christmas “dinner” which will begin at 11 am on Thursday, December 16th.

The district’s winter vacation runs from December 23, 2021 to January 7, 2022. January 6 is an office day. January 7 is a professional development day. Students resume classes on Monday January 10.