How nonprofits are helping Arizonans with dementia 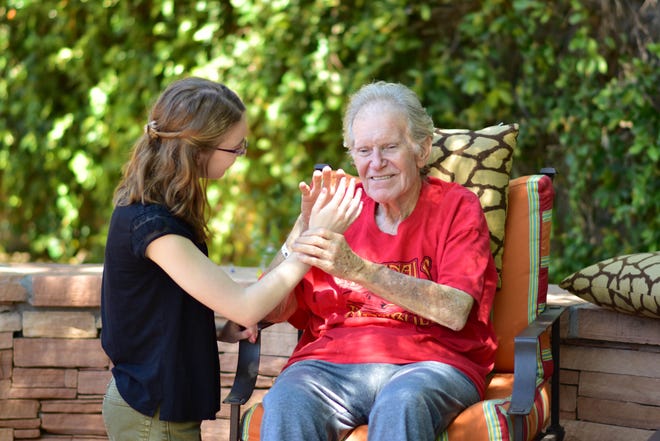 How nonprofits are helping Arizonans with dementia

Arizona is known for its warmer climate appealing to workers and late-career retirees, but experts believe it will soon be known for having the largest population of people with dementia.

Dementia is a rampant problem in Arizona, an aging state.

Eighteen percent of the state is 65 and older. The Alzheimer’s Association estimates that approximately 150,000 Arizonans currently have Alzheimer’s disease. By 2025, this number is expected to increase by 33%.

The number of people with dementia, a cognitive disease, will be even higher.

“It’s going to affect all of us. Our friends, our loved ones. More and more of the people we know are getting older,” said Dr. Gill Hamilton, who teaches dementia classes at Phoenix-area colleges. “It’s not going to happen to anyone we’ve heard of. The predictions are that we’re all going to know people. It’s going to be a part of our lives.”

Last year, the Republic Campaign raised $2.1 million and provided $45,000 in grants to organizations involved in providing care for people with dementia, including:

Caring for the “stigmatized”

Hospice of the Valley received a call from an 80-year-old resident of Phoenix a few months ago. He told the end-of-life care provider that he had recently been diagnosed with dementia and had no one to care for him.

A team from the hospice went to his house, which was unkept and smelled of rot. The patient also tested positive for COVID-19.

“We helped him. We found a nephew who lived in the East and we brought him here. We found them a place to live,” said Hamilton, the hospice’s medical director.

“We had someone come out and do his chest x-ray,” she added. “I actually went to see him (before Christmas) and he’s doing great.”

Hospice of the Valley has nine home-based nursing homes throughout the Valley. Last year, the hospice took in about 150 people with dementia who previously lived alone.

Hospice of the Valley also provides home care, one of the few in the Phoenix metro area to offer this service. It cared for 863 dementia patients at home last year.

“Anything to do with the brain, the mind is stigmatized, isn’t it?” said Dr. Maribeth Gallagher, director of the dementia program at Hospice of the Valley. “Almost like there’s fewer of those people, so it’s more about when we know better, we do better. And so it’s about sharing information. Although the person has changed because there’s changes in the brain, she’s still essentially the same. she’s still there.”

But even for those who receive care, a serious idea persists: there is no cure for dementia. The medical community has yet to find a clinical cure for neurocognitive disorders.

The Banner Alzheimer’s Institute, which has memory centers in Phoenix and Tucson, conducts scientific research to find cures for dementia-causing diseases like Alzheimer’s disease. In conjunction with its biomedical discoveries, the institute also uses research to establish new models and standards of care for individuals and families with dementia.

“Non-medical support is really the lifeline and can be a lifeline,” said Lori Nisson, director of family and community services at Banner Alzheimer’s Institute. “It can really help people live a better quality of life with a condition like Alzheimer’s.”

As there is no medical cure to eradicate dementia, non-medical support is often the most needed care for individuals and their families.

“Seeing a medical professional, to see if there is anything that could be deployed for memory loss, is essential to get a clear diagnosis. Once there is a clear diagnosis, see s ‘there is a drug that can slow the progression,’ Nisson said. “And then the most important part, really, is meeting those non-medical needs. Learn about the disease, get help.”

Not having dementia awareness and education could be detrimental to overall well-being, Nisson said.

A few nurse practitioners run some of the classes and support groups. The majority of other programs are supported and facilitated by social workers.

In March, the institute also launched a podcast, which has so far gained over 18,000 streams.

“There are people who have expertise in this area. So (a person with dementia) can listen. But it also gently guides family members when they really find themselves in a difficult situation and need help. expertise to know how to deal with it on their own. We can really help them solve problems, solve problems and hopefully reduce their daily stress levels.”

The institute currently provides all non-medical care free of charge.

Hospice of the Valley is also filling the needs gap with its four-month supportive care program which supports people with dementia before they go to hospice.

The program is free to anyone in need of help and is not limited to people who can afford the service.

“We have a phrase, ‘dementia care is high touch, not high tech,'” Gallagher said. “So it’s very tactile and unlike a lot of drugs, which are very high tech at this point.”

Hospice of the Valley will open its new dementia care and education campus in Phoenix this year.

The campus will have an adult day care center for people with early to moderate dementia. Next door will be a day care center, built in part to introduce and de-stigmatize dementia to the wider community.

The Hospice de la Vallée aims to prepare the workforce for the needs in the field of dementia. It is planned to train 200 caregivers and social workers and 200 high school and college students per year. According to Hospice of the Valley, nearly 1,000 physicians and 3,000 community members will receive training on campus.

“You have a need, then you solve it,” Gallagher said. “When this disease starts moving through your brain, you don’t have the ability to do it. That’s how we start to skillfully anticipate what the person needs so that we can really help them live and to optimize their well-being. being all the way until they draw their last breath.”

How to donate to Season for Sharing

With the help of Republic readers, Season for Sharing has raised and distributed more than $70 million to Arizona nonprofits over the past 28 years. Help us continue to help our neighbors in need.

Where does the money go?

When you donate to Season for Sharing, you’re helping nonprofits that support education, feed the hungry, and help struggling families. The Republic pays all administrative costs, so 100% of donations go back to the community.