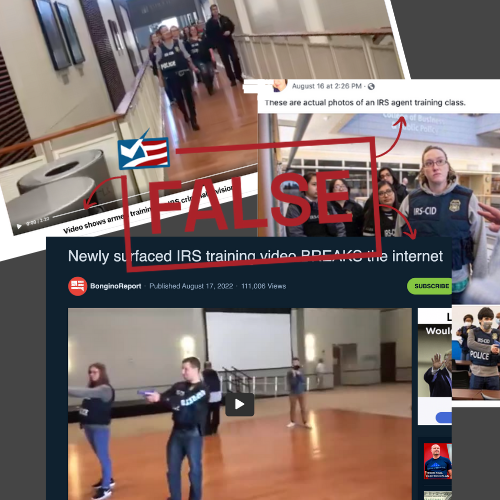 The IRS Criminal Investigations Division’s “Project Adrian” educates the public about the IRS through community outreach sessions with high school and college students. Social media posts share a video of one of the sessions to falsely claim it shows officers in training. The images were released by a university in New Jersey in 2017 and earlier this year.

The IRS has been in the spotlight — and has become the target of Republicans and conservative social media posts — as it will receive nearly $79 billion over 10 years from the Inflation Reduction Act.

The agency is now at the center of a new viral claim. Social media posts are circulating video and photos that claim to show officers in training for the IRS’ Criminal Investigations Division.

As we explained earlier, the The IRS Criminal Investigations Division is the sixth largest United States federal law enforcement agency The division does not perform routine IRS audits on average Americans. This investigation of criminal cases related to money laundering, cybercrime, bbank secrecy, national security, national defense and narcotics organizations, which require firearms and training for their special agents.

But the content of the messages does not come from a formation of the criminal investigations division of the IRS. The footage actually shows the division’s community outreach sessions with high school and college students.

The title of a video shared on Rumble by the Bongino Report, a website of conservative commentator Dan Bongino, falsely claims: “A recently appeared IRS training video BREEZE the Internet.”

A Facebook post shared the same video with the caption “Video shows armed training for IRS Criminal Division.” The post received over 44,000 views and nearly 3,000 likes.

Another Facebook post shared photos – some showing the same people as in the video – with the caption: “These are real photos of an IRS agent training class. They are not.

Justin Cole, a spokesman for the IRS’ Criminal Investigations Division, told us in an email that the photos and video came from a program called “The Adrian Project” that has been featured in dozens of universities and high schools across the country.

“To be clear, this is NOT training that the IRS-CI provides to potential special agents,” Cole said. “This is a community outreach event that educates the public about who we are and what we do.”

The Adrian project – named after the first college where the IRS Criminal Investigations Division conducted the project 20 years ago – is a one-day program in which students participate in a mock criminal investigation.

Cole said the photos and video appear to be from 2017 and earlier this year, all taken at Stockton University in New Jersey.. The university posted the images on the school’s website and on Flickr in October 2017 and March 2022, identifying them as Project Adrian activities. The video shared in the social media post was posted in 2017 on the University of Stockton’s YouTube channel.

The caption of the video read: “The IRS Local Criminal Investigation Bureau in Newark brought Project Adrian to the Stockton Campus Center for a one-day simulation of a mock criminal investigation.

The program’s website states, “Students are ‘sworn in’ as special agents in the morning and wear IRS protective vests, use handcuffs, toy guns and radios to communicate with their fellow agents on the case. . Students hone their forensic accounting skills and are introduced to suspect interviewing, surveillance and document analysis. The day ends when the students solve the crime and arrest the false offender.

The IRS, which is an office of the Treasury Department, will use the money provided by the Inflation Reduction Act”to modernize the IRS” and “improve taxpayer services — from answering the phone to improving computer systems — and cracking down on high-income and business tax evaders,” according to a Treasury Department spokesperson. .

Editor’s Note: FactCheck.org is one of many organizations work with facebook to debunk misinformation shared on social media. Our previous stories can be found here. Facebook has no control on our editorial content.