In a 32-year career, Hawaii Public Schools Superintendent Keith Hayashi stresses the importance of giving back 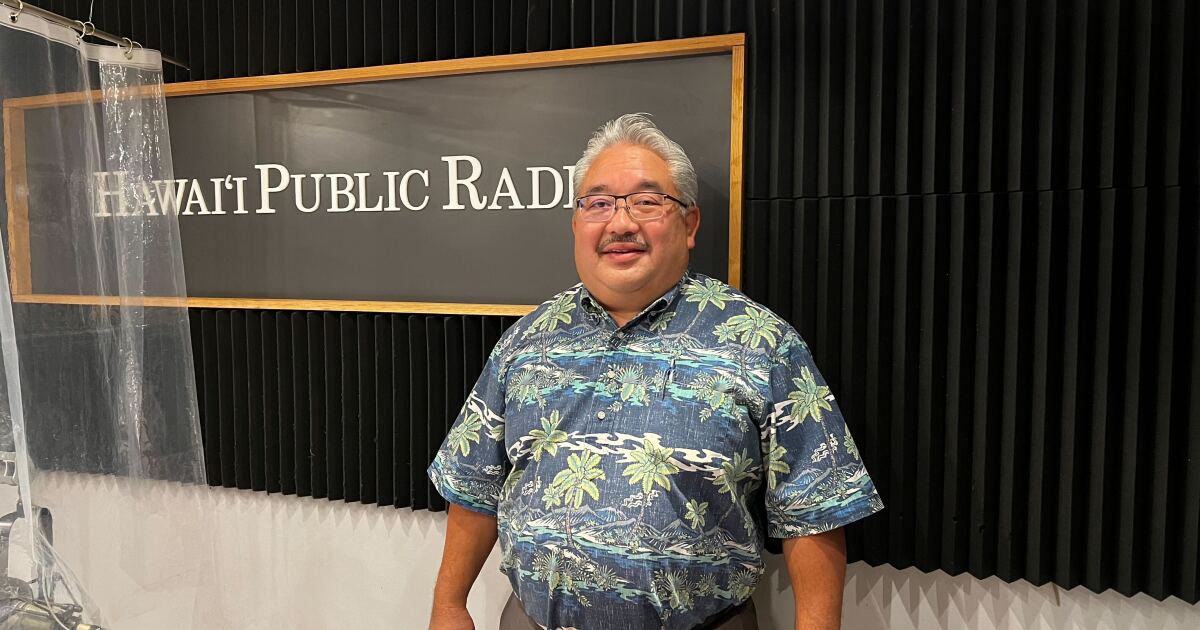 In a 32-year career, Hawaii Public Schools Superintendent Keith Hayashi stresses the importance of giving back

Keith Hayashi’s office is on the third floor of the Queen Liliʻuokalani building overlooking Punchbowl Street. The sirens of ambulances entering and leaving the nearby Queen’s Medical Center can be heard in the office.

The spacious office is the result of his 32-year career with the Hawaii Department of Education.

“I was an average student,” Hayashi said. “Not top of the class or anything.”

Hayashi graduated from Kaimukī High School. He tells HPR that while he gravitated toward science classes, he struggled in certain areas.

“I was lucky, I had very good teachers. I remember them, because of the conviction and the willingness to help support me. … I struggled in some areas and I might have excelled in others.”

Teaching may not have been the career Hayashi would have chosen as a child. But the importance of sharing knowledge and teaching was imposed on him from an early age, with his participation in judo.

“It’s important to give back,” he said. “How do you help the youngest to grow? So, in middle school, I was very lucky that my instructors gave me this opportunity to work with young people and help them. »

After graduating, he attended the University of Hawaii at Mānoa. It wasn’t until his freshman year that the university sent a letter saying he had to declare a major he was planning to study.

“A friend of mine who was in teaching. She was like, ‘Hey, Keith. You do judo, what do you like about it?’

“I said, ‘Well, what’s really great is working with the younger guys and helping them. And she says well, you should think about becoming a teacher because I love working with kids, I love seeing them improve and grow,” Hayashi said. “So I did, and I just loved that.”

Hayashi was trained at Kahala Elementary School as a teaching assistant. After graduating from UH, he taught first grade at Lehua Elementary in Pearl City. Soon after, he began teaching sixth graders.

While at Lehua Elementary, he was encouraged to join a DOE program working with other schools to boost student literacy in the Pearl City-Waipahu District. Hayashi tells HPR that the experience inspired him to go into school administration.

“The classroom was awesome, that can definitely make a difference,” Hayashi said. “But as a school administrator, how could I work with others to perhaps support more students.”

Hayashi rose from teacher to assistant principal and director. Eventually, he became principal of Waipahu High School – a position he held for over a decade. As Director, he also assumed Complex Area Superintendent responsibilities for Pearl City and Waipahu.

As principal of Waipahu High, he was credited with starting the Early College program at the school. The program partners with Leeward Community College and UH to teach college-level courses to high school students to help them get a head start on higher education and career opportunities.

Hayashi was hired in August 2021 to be the acting superintendent when Christina Kishimoto’s contract expires.

In May, the state Board of Education selected Hayashi over two other candidates after a 1 p.m. meeting. Dozens of witnesses supported Hayashi, citing his experience as an educator and administrator, and the support and resources he provided to staff and students.

However, Hayashi took over as acting superintendent while the state was still grappling with the effects of the pandemic. At the time, the state was dealing with the Delta variant surge and COVID vaccines were not available for those under 12.

Hayashi stood by the department’s decision to hold in-person learning, with some caveats — such as mandatory mask-wearing indoors and, at the time, outdoors.

“Keeping our schools open was really important for the kids – to be able to make sure they’re in school, that they can be with their peers, that they can access the kinds of services that schools offer,” he said.

But dozens of parents and residents testified against Hayashi at the special BOE meeting in May. They cited his decision to extend the mask mandate in schools and criticized his lack of communication with parents.

“I fully understand that they have their opinions, thoughts and beliefs. And I respect that,” he said. “I also hope that they also understand, whether we agree or not, that [the] The number one priority for me is the safety of our children and our employees. And no decision is easy when you’re making a decision on behalf of 160,000 children and 40,000 employees.”

Hayashi tells HPR that when it comes to communication, he and his team are always working to improve. And while staff did their best to communicate with principals and parents, they acknowledged that not everyone may have received a response.

Although this will be Hayashi’s second school year overseeing the DOE, it will be the first time he has fully directed the course of Hawaii’s public education system.

“There is certainly an urgency for us to meet the needs of our students after a pandemic, Hayashi said. “I think there are many areas where we need to work, but how do we collect this data, offering these opportunities for students to improve and support our teachers in the classroom and our school leaders to be able to do the important work they need to do. »

While he wants to accomplish a lot during his tenure, from expanding career development opportunities to providing the resources for schools to expand student growth programs, he knows he won’t be alone.

“What keeps me up at night I think, am I doing everything I can to make a difference to support our system? But I think the big thing is that it’s not just me , we have a lot of hands working together.”

On the other hand, Hayashi says the interaction with students and school administrators is what keeps him going in the morning.

“It’s especially easy to get up in the morning when I go to visit a school,” he said. “Watching the kids get off the bus, early in the morning, just seeing them excited to be in school – whether it’s elementary, middle or high school. … You can feel that energy. You know, It doesn’t happen by accident, it comes with a lot of hard work and intention on the part of employees.

“And if I’m not visiting a school, coming to work and working with professionals who are very determined to make a difference,” Hayashi said. “That’s what it’s about.”

No matter how tough superintendent’s job can be, Hayashi says he’d rather do nothing but be an educator.