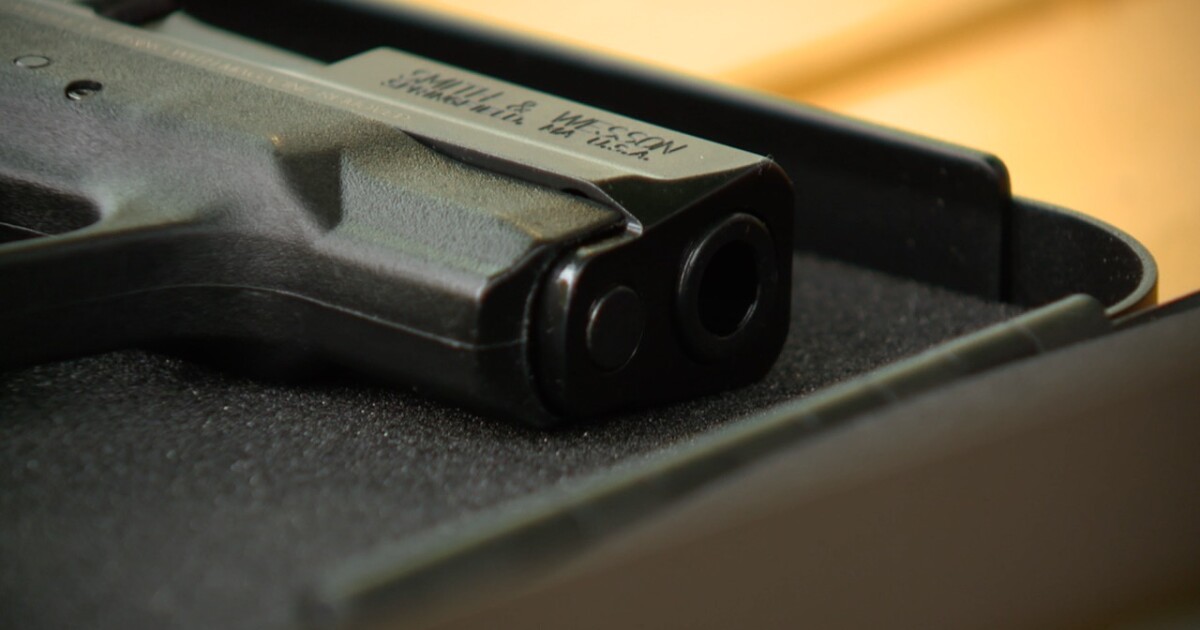 COLUMBUS, Ohio — A controversial new gun law in the Ohio Senate has law enforcement officials and educators begging their lawmakers to think twice. House Bill 99 would make it much easier for adults to carry guns in schools, relaxing regulations by about 95%.

After a school shooting in 2016, a southwestern Ohio district decided to allow some of its teachers to be armed. Madison Junior/Senior High School parents sued and Ohio Supreme Court sided with them, saying state law says teachers must have extensive training peace officer (Peace Officer Basic Training Academy approved by the Ohio Peace Officer Training Commission, or OPOTC) or 20 years of experience as a peace officer.

Ohioans have experienced 38 school shootings since 2013, according to advocacy group Everytown for Gun Safety.

Next is HB 99. It exempts a “person authorized to be armed in a school security zone” from the current requirement that an employee of a public or private educational institution who is armed while on duty must follow satisfactorily an approved basic training program for peace officers.

The Republican-proposed legislation has its fans, like Rob Sexton of the Buckeye Firearm Association.

“The only thing we know is this: the faster the active killer is confronted, the more lives are saved,” Sexton said. “We hope the legislature will pass Bill 99 and restore some common sense to school safety.”

Under the bill, teachers, janitors, cafeteria staff, and basically anyone who isn’t a student could carry a firearm with some training.

Someone would only be required to complete 20 hours of training, plus an additional eight hours to obtain a concealed carry permit.

“It’s a bundle, just a ridiculous array of police training when what we really need is a quick deterrent that can step in and save lives when tragedy strikes,” Sexton said.

It also has restrictions. A person cannot spend more than two hours training with the firearm. News 5 reached out to the bill’s sponsor, Rep. Thomas Hall (R-Madison Twp.) to find out why, but he was unavailable to speak Friday afternoon.

“How can you expect someone with only 20 hours of training, including only two hours of hands-on training with a weapon, to act in a way that protects the safety of everyone in their crisis?” DiMauro asked. “When Mike DeWine was Attorney General for the State of Ohio, that same agency set a standard of about 150 hours of training. That seems like a lot more reasonable considering the high stakes that are involved when you talk about the life of the students and staff of our schools.

With the reduced amount of training, the bill attracted opponents such as DiMauro and Michael Weinman of Ohio’s Fraternal Order of Police (FOP).

“We don’t think the training hours are adequate for what they’re going to be doing in their schools,” Weinman said. “[It’s] carrying a gun and unloading a gun in a crowded room or cafeteria, being able to keep that gun if students want to take it away from them. »

The couple say the bill is very broad and doesn’t even list a requirement for how the gun must be stored safely during school, they are concerned about accidental discharges, students who seize the gun and the fear caused to children.

“These teachers, they have a different mindset, don’t they?” said the retired Columbus police officer. “We’re there to deal with threats and make sure schools are safe, which isn’t necessarily what they’re trained to do.”

They are certainly not trained for it, according to DiMauro.

“The last thing we need is to ask educators to do things that are really not their responsibility, which is to ensure the academic success of students and to ensure that we provide these foundational supports in terms of socio-emotional needs so that they can succeed academically,” the educator said. “There are so many pressures facing educators in our schools today.”

According to a study by the OAS and its national affiliate, 90% of educators across the country felt burnt out and 55% of educators planned to leave the profession sooner than expected, either by retiring or choosing another job, DiMauro added.

“It’s not just for teachers, and so they won’t even have the basic training that a teacher gets on how to control discipline in the classroom,” Weinman said. “It’s very concerning to us that they have these armed individuals in these schools.”

Having many officers in the schools just isn’t possible at this point, Sexton said.

“The House Bill 99 solution allows you to supplement what you can spend on a resource officer with additional staff who could be there to save lives,” Sexton said. “The high school campuses are quite large.

“So you put a bandage on it, you say, ‘well, we have a resource officer.’ Well, one is better than none – but really, can you cover an entire high school campus or a college campus with just one officer?The answer is probably not adequate.

Weinman took offense, citing that being a resource officer is a huge responsibility that police train for over 100 hours.

“It looks like they’re trying to control costs,” Weinman said.

“What price do you want to put on child safety – with a janitor running around with a gun?” said the officer. “There’s always some sort of partnership you can do with the sheriff’s office or local police departments. You know where you can split that cost and work things out. There have been bills where you can have a levy specifically for schools to have school resource officers.”

DiMauro said schools should discuss the roles of school resource officers more to determine how best to use them.

“I think every community needs to have a conversation to really figure out what the role of a school resource officer is as well,” DiMauro said. “We want to make sure that schools are safe places to learn, and we want to make sure that we’re addressing issues of equity that anyone in that role is all about building relationships to prevent proactively addressing issues of violence, instead of just being able to react to it.”

It’s also valid that students of color may feel intimidated and unsafe by the presence of police in the building, DiMauro said.

“Questions about ensuring racial equity, about ensuring that schools are not primarily tasked with criminalizing misconduct, that we are not turning schools into prisons, that we are not doing anything to really prevent accessibility learning opportunities for all students, regardless of race, regardless of background, are really important,” he added. “These are all decisions that each local school district school board, teachers, parents, community members really need to talk about together to decide what their community needs most.

“Whether or not to arm teachers, whether or not to have school resource officers or armed police on school campuses, how to handle all of these things – are important decisions that need to be made. locally.”

There is also a list of areas of concern about the bill for DiMauro and Weinman. None of the items below are mentioned in the invoice:

News 5 contacted the sponsor of the bill to answer these questions, but he was busy as it was early afternoon on a Friday.

Sexton said criminals shooting at schools may think twice if they are aware of multiple adults in the building who are also carrying guns.

“I think ultimately the best deterrent to crime is the idea deep in the criminal mind that there might be someone armed in a situation,” he said. .

The gun lobbyist also touched on the fact that depending on where someone lives, law enforcement may be late for a shooting.

“Police response times in extreme rural areas are much longer than in the suburbs and much longer in inner cities where there are a lot of bad things happening at the same time,” he said. “They may not have your school on time.”

In its first hearings, about 15 people supported the bill, while more than 215 testified against it. DiMauro said that while dozens of educators have spoken out against it, lawmakers have had “minimal” contact with him.

“The sponsor held a formal stakeholder meeting with supporters and opponents of the bill early in the process,” he said. “There hasn’t been a lot of dialogue and engagement to really listen to the concerns of the education or law enforcement community on this bill.”

The bill passed the House and is now being heard in the Senate.