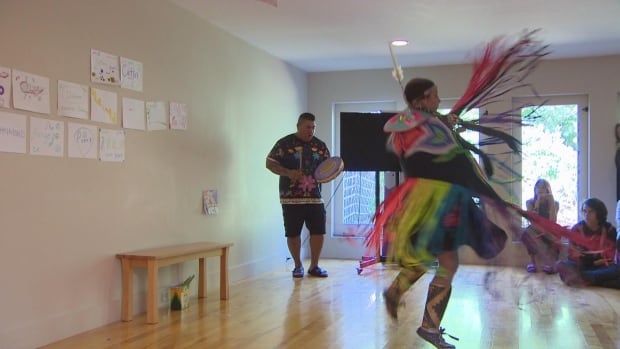 Away from his home in Northern Ontario, Moxy Manitowabi recently joined 16 other Indigenous youth from rural Nova Scotia to merge traditional knowledge with Western science in a program called Melkiknuawti – Mi’kmaw for “who gives you strength”.

“I moved here from Ontario, just me and my mom and I felt really disconnected from the land and the culture here…I felt like I needed to be more connected. So yeah, it was a lot of fun,” said Manitowabi, a member of the Wiikwemkoong First Nation on Manitoulin Island in Lake Huron.

“It’s important to stay connected and not forget our culture, our language and our land.” The week-long program takes place at an old farmhouse now called Windhorse on the South Shore of Nova Scotia. It is developed by Ulnooweg Education Centre, a registered Indigenous charity, and SuperNOVA, a Dalhousie University initiative that promotes STEM – which stands for science, technology, engineering and math.

It is free and provides accommodation, meals and transportation to participants.

“We immerse them in a variety of STEM-based learning activities as well as cultural activities,” said Caitlin McPhail, Development Coordinator at SuperNOVA at Dalhousie University.

“We’re really giving them the opportunity to blend Indigenous science and Western science and see how those two can come together in a really collaborative way,” said McPhail, who is also a lead organizer for Melkiknuawti and a member of the Siksika First Nation in southern Alberta.

Melkiknuawti describes the idea that knowledge of nature can be a path to strength. The program itself is modeled after similar programs created by Actua, a national organization that supports STEM learning for youth through its members at universities and colleges across Canada.

Dawson Smith, a participant from Acadia First Nations in Nova Scotia, says his mother is thrilled to see him return to his roots and that it’s important to keep the culture alive.

“Our elders, they lost all their culture and their language and I think it would be great [for me] to learn it again.”

Holly Griffiths, director of science and innovation at the Ulnooweg Education Centre, says the aim of the week-long program is not only to get Indigenous youth interested in STEM, but also to encourage the idea of etuaptmumk.

Etuaptmumk is a Mi’kmaq word meaning two-eyed vision, a perspective that combines Western and Indigenous teachings rather than separating the two.

“This [Indigenous science] was somehow separated and not treated or characterized as scientific knowledge, whereas it has a history like thousands of years,” Griffiths said.

“So bringing that full circle back, and just introducing science and STEM concepts in a more meaningful way, through observation, and completely immersing yourself in nature and your five senses, is super important if you want to create those meaningful connections.”

According to Nancy Turner, a researcher who has studied Indigenous knowledge of plants and environments in northwestern North America for more than 40 years, Indigenous peoples have identified more than 400 different species medicinal plants, lichens, fungi and algae.

Indigenous people make up about 4% of adults in Canada, but less than 2% of people working in science, technology, engineering and math are Indigenous, according to Conference Board of Canadaan independent research organization.

Jonny Hird, one of the content instructors, says he hopes programs like these can make STEM more accessible and help change attendees’ minds about how they personally think about STEM concepts.

McPhail said they would like to expand Melkiknuawti to the rest of the province, maybe even across the country.

“We’d like this to be able to be offered not just for a week, in the summer, we’d like it to become something that we’re able to offer year-round in a variety of communities across Mi’kma’ki.”