Our rich history: the Sisters of Charity of Nazareth, sociology and criminal justice at Thomas More

Our rich history: the Sisters of Charity of Nazareth, sociology and criminal justice at Thomas More

It was in the early 1930s, actually under the auspices of the Department of History (1933), that a two-hour course entitled “Introduction to Sociology” was offered with the Reverend Anthony Deye as instructor. The course was so popular. that it became a permanent addition in the 1940s (1944). According to the Thomas More Archives, the very first course in sociology had been offered as early as 1924 but it “was discontinued in 1928 due to changes in teacher certification standards” (Archives, flight. 8 no. 1, September 1997, Thomas More University Archives).

Not surprisingly, the overall increase in enrollment after World War II (due to the push for mixed growth and the GI Bill), led to interest and pressure for an expansion of the program. Sociology was one of the fields recommended by newly arrived male students. It may be remembered that the early growth of Villa Madonna College in the late 1920s and 1930s had been directly linked to the will of the three orders of founding sisters (Benedictine Sisters; Sisters of Notre Dame; Sisters of Divine Providence ) to commit to the staffing of key departments. What one might assume, with only one introductory sociology course offered each year between 1933 and the mid-1940s, is that none of the religious orders were accredited or interested in the field.

Pr. Deye was a historian by training and not accredited beyond a basic introductory offer in sociology. Under these circumstances, the Dean (President) of the College, the Reverend Thomas A. McCarty, contacted a fourth order of sisters, the Sisters of Charity of Nazareth, and asked them to assign a sister.

It was Sister Jeanne Clare Billett SCN who was sent by her community to occupy the position of first director of the Department of Sociology in the spring of 1947. The first “major” students were welcomed in the fall of the same year. For the inaugural year, in addition to P. In Deye’s introductory class, five other courses were offered between the two semesters of 1947-1948: Social Change and Social Problems; Christian social reform; Child protection; child development; and Family Affairs Work (Archives). Due to the nature of the content and the importance of contact with practitioners in the field, numerous partnerships were pursued with social service agencies in the region. 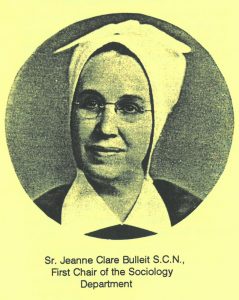 The result was a notable expansion in the 1950s. Sister Frances Rita Ballard of the Sisters of Charity of Nazareth replaced Sister Jeanne Clare as head of the department in 1953. By mid-1960s, ready for move to new campus in 1968, the department’s faculty consisted of three full-time instructors. The two with the longest terms at the college were Michael Endres, who would become the president from 1967 to 1971, and Mary Harmeling, who led the department from 1971 to 1976.

In 1971, with the vision of Michael Endres, the department was expanded with the hiring of a full-time social work instructor (Bob Berger), leading to the introduction of the social work program in 1973. See NKyTribune’s historical chronicle here. 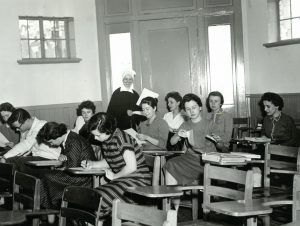 Upon her arrival, Maryline Glover had been an inspiration to the department and was a strong partner to Bob Berger, as well as to Sr. Mary Jo Baumgartmer, who served as president from 1982 to 1988. Unfortunately, to what was clearly a high point in her career in the mid-1990s, Professor Glover experienced a health crisis (1995). Bob Berger served as head of the department in his place for the rest of that decade. Glover, who had played a major role as president in advocating for the rejuvenation of the criminal justice program and who had co-presented papers at several conferences (with Bruce Gibson), had (with the help of Bob Berger) expanded enrollment in criminal justice majors. justice and sociology as never seen before. As we approached a new century, Maryline Glover was greatly missed by her peers and especially her students when she was unable to return. 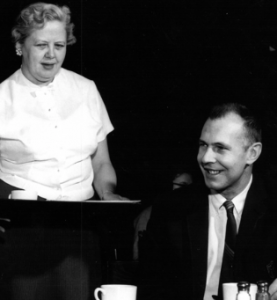 In the 21st century, the Department of Sociology and Criminal Justice is blessed with a triumvirate of strong professors, two with over 30 years of service in sociology (Professors Ellie Megerle and Dr. James Camp) and a third in Justice criminal, Dr. Amy Thistlethwaite. Both majors have had consistent success in preparing students for the world of work, as well as postgraduate study. Among the greatest successes in sociology are the numerous internships offered to students on both sides of the Ohio River and, since the early 2000s, the involvement of students in service-based studies abroad at the Mexican border (El Paso, Texas) with Dr. Camp. Later in the 2010s, Professor Camp inherited the Jamaican Service-Learning Program (JSLP) from accounting professor Thomas Gilday (see NKyTribune’s history column here.) 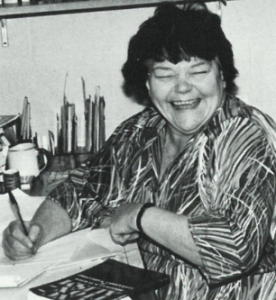 Currently, the Department of Sociology and Criminal Justice continues to offer two strong options for students wishing to study and practice the social sciences.

Currently (Spring 2022), this is heavily weighted toward the practitioner component, with 47 majors and 16 minors in criminal justice, and 7 majors and 11 minors in sociology. In this context, one could say that the greatest strength of the department, in addition to the outstanding chemistry among current faculty, is the accepted belief that together the two majors create a seamless curriculum. Department faculty teach cross-courses for both sets of majors, with similar placements for all students on both sides of the Ohio River. What matters, above all for students and teachers, is that their team today celebrates their many successes in tribute to their predecessors of past decades.

Dr. Raymond G. Hebert is Professor of History and Executive Director of the William T. Robinson III Institute for Religious Liberty at Thomas More University. He has just completed his 46th year at Thomas More and, with this training, will now serve as editor of the official history of Thomas More College/University from 1971 to 2021. With a projected title of RETROSPECT AND VISTA II, he will serve as sequel to Sr. Irmina Saelinger’s RETROSPECT AND VISTA, the story of the first 50 years of Thomas More College (formerly Villa Madonna College). He can be contacted at hebertr@thomasmore.edu.

We want to learn about the history of your business, church, school, or organization in our area (Cincinnati, Northern Kentucky, and along the Ohio River). If you would like to share your rich history with others, please contact Our Rich History editor Paul A. Tenkotte at tenkottep@nku.edu. Paul A. Tenkotte, PhD, is a professor of history and gender studies at Northern Kentucky University (NKU) and author of numerous books and articles.