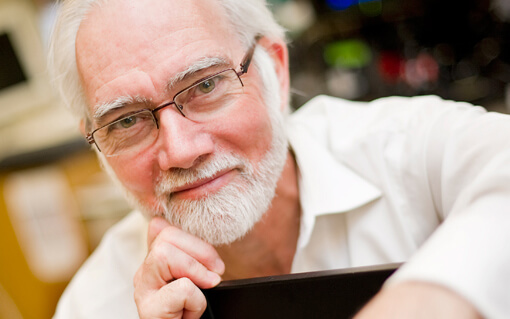 Dr Robinson holds a joint appointment as SVM Professor of Cytology in the Department of Basic Medical Sciences and Professor of Biomedical Engineering at the Weldon School of Biomedical Engineering. He is internationally recognized for his contributions to cytometry, including the latest spectral technologies. Dr. Robinson’s work has led to 18 patents in the United States, Europe and Japan. In 2019, Dr Robinson received the Distinguished Service Award from the International Society for the Advancement of Cytometry. He is also a past president of the International Society for the Advancement of Cytometry and is currently Editor-in-Chief of “Current Protocols in Cytometry”.

Dr Robinson received his doctorate in immunopathology from the University of New South Wales in Sydney, Australia, and completed a postdoctoral fellowship at the University of Michigan. In 2020, he was elected a member of the American Association for the Advancement of Science (AAAS), which is the largest general scientific society in the world.

Dr Robinson has a long-standing interest in the evaluation of phenotypic analysis of blood cells. He and his team have developed several cell analysis technologies for the functional analysis of white blood cells using flow cytometry and various imaging modalities. His laboratory has significant experience in assessing the phenotypic status of blood samples, in particular the dissection of T cells, B cells and various other cell subsets. He also has extensive experience in sorting cell populations for future cell culture needs or for additional molecular genetic analyzes.

Dr Robinson has taught advanced courses in over a dozen countries, given over 160 invited international lectures and made over 400 conference presentations. He was also one of the first to adopt educational material on the Web by producing one of the first published CD-ROMs known in 1996. He has since released 15 CD-ROMs or DVDs with a total distribution of around 100 000 copies – all free – download.

Dr Robinson becomes the fourth professor emeritus appointed to the college in the past two years, joining Dr Harm HogenEsch, professor emeritus of immunopathology; Dr Ourania Andrisani, Emeritus Professor of Basic Medical Sciences; and Dr. Deborah Knapp, Emeritus Professor of Comparative Oncology. The college also has two other distinguished professors, Dr Timothy Ratliff, Professor Emeritus of Comparative Pathobiology, and Dr Suresh Mittal, Professor Emeritus of Virology, for a total of six. A reception in honor of the Distinguished New Professors is scheduled for January 20 from 3:30 p.m. to 4:30 p.m. at the Veterinary Medical Library. All members of the PVM family are invited.

Click here to view a press release from Purdue on the board’s ratification of Dr. Robinson’s appointment along with five other faculty positions at the university.