The Pryor Center Presents ‘Reporting for Arkansas: The Documentary Films of Jack Hill’ 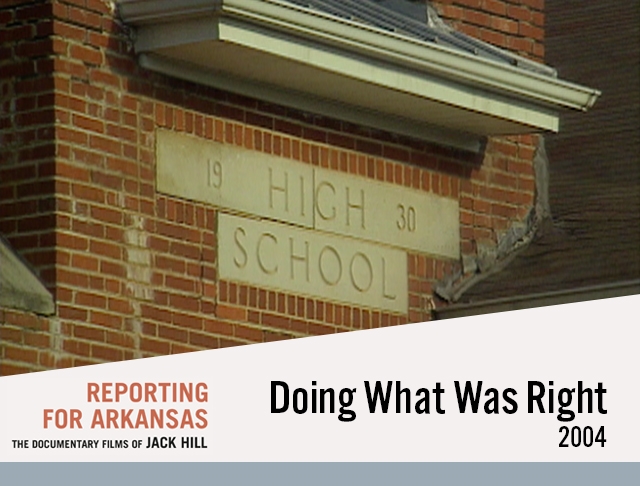 The Pryor Center Presents ‘Reporting for Arkansas: The Documentary Films of Jack Hill’

The David and Barbara Pryor Center for Arkansas Oral and Visual History at the Fulbright College of Arts and Sciences kicks off the 2022-23 season of Pryor Center Presents at 6 p.m. Wednesday, September 14, with a discussion by Dale Carpenter and Robert Cochran about their book recently published, Reporting for Arkansas: The Documentary Films of Jack Hill. This event is co-sponsored by University of Arkansas Press.

Reporting for Arkansas is a recovery and reissue from journalist and documentary filmmaker Jack Hill’s pioneering Little Rock production company, TeleVision for Arkansas. His best films reflect a passion for Arkansas history and a determination to report important events from a local perspective.

This presentation will feature Hill’s 2004 film, do what was right, about the 1954 public school desegregation in Charleston. Chaplain Rev. Sylvia Bell and Joe Ferguson, who both attended the Charleston School in 1954 and appeared in the film, will join Carpenter and Cochran on stage.

Carpenter taught broadcast journalism and documentary filmmaking at the university for a quarter of a century. His documentary films have aired nationally on PBS and have won seven regional Emmy Awards. Carpenter also served as a cameraman on numerous Jack Hill documentaries, including do the right thing.

Cochran is an English professor and director of the Center for Arkansas and Regional Studies at the U of A. He is currently finishing a book on Charles Portis. Cochran edits the Arkansas Character series for U of A Press, including Reporting for Arkansas is the fourth volume.

Pearl’s Books will have copies of the book available for sale at the Pryor Center.

This event will be held in person and via Zoom. If you would like to attend virtually, please register in advance with an email address associated with a Zoom account. Registration is not required for in-person participation.

The Pryor Center is located at 1 E. Center St., Suite 120. The event is free and open to the public, and parking is available in Fayetteville Square.

Monday, September 19 — 6 to 7 p.m. at the Juke Joint Exhibit in the Pryor Center Atrium
“From Juke Joints to Jacobean Literature: The Vernaculars of Arkansas and the Making of Southern Fiction” presented by Dr. Florence Dore.

Wednesday, October 12 — 6-7 p.m.
The Pryor Center presents “Race, Labor, and Violence in the Delta: Essays to Mark the Centennial of the Elaine Massacre” presented by Dr. Michael Pierce and Dr. Calvin White Jr.

Wednesday, Oct. 26 — 6-7 p.m.
One Book, One Community – Keynote with Angeline Boulley, author of Daughter of the Fire Keeper.

Prelude to War: A film screening and discussion
Please see the online guide to this exhibition and related events for more information: https://uark.libguides.com/AATH”

About the University of Arkansas: As Arkansas’ flagship institution, the U of A offers an internationally competitive education in more than 200 academic programs. Founded in 1871, the U of A contributes more than $2.2 billion to the Arkansas economy through the teaching of new knowledge and skills, entrepreneurship and employment development, discovery through research and creative activity while providing training for professional disciplines. The Carnegie Foundation ranks the U of A among the few American colleges and universities with the highest level of research activity. US News and World Report ranks the U of A among the top public universities in the nation. Learn how the U of A is working to build a better world at Arkansas Research News.