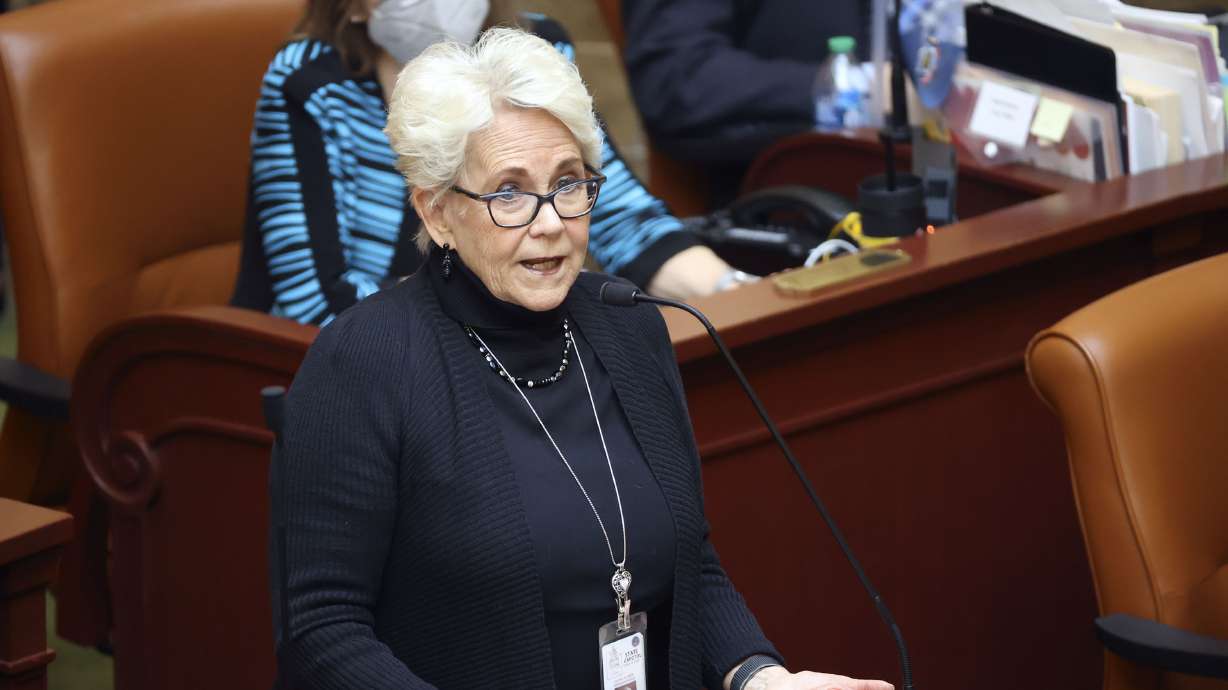 Rep. Carol Spackman Moss, D-Holladay, speaks in the House Chamber at the Salt Lake City Capitol on January 21. Moss introduces a bill that would require divorced couples with children to take an educational course when they need to change their parenting plans. (Kristin Murphy, Deseret News)

SALT LAKE CITY — A new Utah bill would require divorced couples with children to take a training course when they need to change their parenting plans.

The course would remind parents of the high stress post-divorce situations can have on children, said HB86 sponsor representative Carol Spackman Moss, D-Holladay.

“For example, let’s say the mother has custody but she remarries and moves elsewhere, and so the father is going to have them more often and he doesn’t think he should pay that much in child support. In other words , these changes can be very controversial and cause a lot of anxiety for children,” she told a House Health and Human Services Committee on Wednesday.

“And even more than that is the expense of hiring lawyers and having dueling lawyers trying to manage differences between parents, and that’s very expensive. And that binds the court in the same way,” Spackman Moss said.

Parents should bring a certificate to court to show they have completed it before changes can be made to their parenting plan. But if they both already agree, the court can waive the course requirement, she said.

The concept isn’t new to the state, as couples considering divorce must take a course to prepare them, Spackman noted.

She said many people who took these classes said it helped them navigate the process, and some even asked for additional classes.

Parents could attend the interactive course online or in person, and it would take approximately 60 minutes.

Brian Higginbotham, associate vice president of Utah State University Extension, said the program was needed in the state based on court data. There are 13,000 divorces in the state a year and 4,000 proposed changes to parenting plans.

The bill would help minimize conflict and could prevent people from having to go to court, he said.

When the meeting was opened for public comment, Rob Boudrero – who pitched the idea for the bill to lawmakers – said his wife had faced a very conflicted situation after a divorce over the past few years.

“It was so traumatic that way,” he said, adding that it also resulted in high attorney fees.

Boudrero said he believes an educational course like the bill would require could help in situations like the ones his family is facing. He said he also lost a family member to another high-conflict divorce, and he thanked lawmakers for reviewing the bill to help keep others from finding each other. under similar circumstances.

The system isn’t broken, Higginbotham said, but it helps if someone can afford a lawyer or knows how to navigate the court systems on their own. For those who cannot, the course would provide this information to parents. The course could save families thousands of dollars, he added.

“Some have wondered if there was any value in a brief hour-long intervention,” Higginbotham said. “Yet what the research shows is that these low-dose programs are effective, and in some cases as effective as crash courses.”

Rep. Candice Pierucci, R-Herriman, questioned whether it’s a good idea to charge extra fees for parents who are already in a stressful situation.

But Moss and Higginbotham highlighted the idea that it would potentially save couples from having to hire lawyers.

The bill received a favorable recommendation from the committee, with only Pierucci voting against forwarding it to the full House.