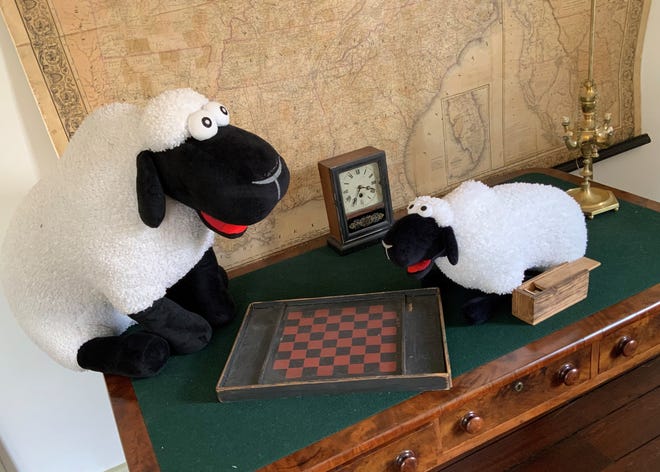 STAUNTON – Sheep are free in Staunton.

Well, not real sheep, but stuffed sheep – Woolly and Wee Woolly – which are part of the educational program at the Woodrow Wilson Presidential Library and Museum.

The museum already had several virtual education programs when the pandemic closed its doors to the public, but education staff wanted to find more ways to help teachers and parents as schools began teaching remotely,

Emily Kilgore is the director of education and engagement at the museum.

“Woolly has always been an integral part of our story telling the story with children, in particular,” Kilgore said.

The idea for Woolly was born in 2015 when a museum intern created the sheep in cartoon form. When Kilgore came on board in 2018, she wanted to find more ways to engage Woolly in educational programs.

When Wilson was president, he had sheep tending the White House lawn. Wool was also sold to help the war effort with money donated to the Red Cross. And Wilson and his wife, Edith, thought the sheep would also be a good way to entertain the public.

“They kind of became America’s sweethearts, World War I mascots,” Kilgore said. “That’s kind of where Woolly comes from. We called Woolly a cousin of the White House sheep.”

Kilgore came up with the idea of ​​turning Woolly from a cartoon animal into a stuffed animal. The sheep now has both a Twitter and Instagram account, and goes on adventures both in the museum and around Staunton.

The adventures, called “Sheep on the Loose”, are videotaped with another available every Wednesday. As of October 28, five videos are available to watch. Wee Woolly was also added to the adventures.

With many young elementary school students having to learn virtually, Kilgore thought video adventures would be a good resource for teachers.

Kilgore is the voice of Wee Woolly while Woolly is voiced by Hunter Hanger, the museum’s special events supervisor. The screenplays are written by Linda Petzke, a part-time museum employee and full-time social studies teacher at Stewart Middle School in Fort Defiance.

“Together we decide on a topic,” Petzke said. “Sometimes I have to do research, but most of the time I just rely on my 17 years at the Presidential Library.”

Petzke tries to add a little humor to the scripts. She said the hardest part for her, after being a middle school teacher for so long, is thinking like an elementary school teacher.

In her mind, she thinks second through fourth grade when writing the scripts, Petzke said, but that’s good for younger students, too. And there may be upcoming videos aimed at older students.

After:What you need to know for Election Day 2020

After:1 white, 1 black, no background: two cases show a difference in the way bail is handled by magistrates

“We thought it would be a really fun way to create a different way of looking at the museum,” Kilgore said.

With each episode there is a watch, a read and an action. Students watch the video, read something about that particular week’s topic, and do an activity.

Previously released videos include those on the history of Staunton and Woodrow Wilson’s home, food preparation in the 1850s, and toys and games of the 1850s.

“My favorite was the kitchen episode because we got to play I Spy and talk about what was the same and what was different back then,” Kilgore said.

Four more episodes have been taped and are ready to air in the coming weeks. One features Woolly traveling in Wilson’s Pierce Arrow limo.

“Staunton is such a cool place,” Petzke said. “We could just take the sheep and drive around town. We just had the best time going to Trinity (Episcopal Church) and Sunspots and Pufferbellies and The Split Banana.”

After that trip around Staunton, Petzke thought the videos might not only be educational, but good for the town’s public relations.

Kilgore said they try to keep Woolly and Wee Woolly as non-binary as possible so everyone can relate to the sheep. In the videos they try to be aware of the pronouns used.

The Woolly videos even have a jingle written and sung by Staunton’s Richard Adams.

“It’s definitely entertaining,” Kilgore said. “I never thought I’d be wearing a stuffed sheep. I get a lot of weird looks, but I’m so used to it now.”

After:More than a year after its debut, ACC Network is still not in Comcast’s lineup